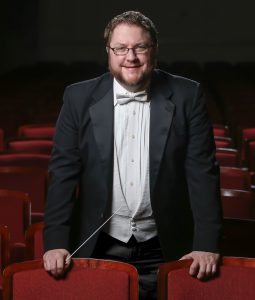 Dr. Hemenway is the Assistant Professor of Music and Director of Instrumental Studies at William Jewell College, where he conducts the Symphonic Band, directs the Jazz Band, teaches conducting and instrumental technique classes, supervises music education students, and administrates the instrumental division of the music department.

Dr. Hemenway is an active conductor, adjudicator, and clinician, regularly working with community and school bands from a wide array of experience levels. Prior to his position at Jewell, he served on the music faculty at North Central College in Naperville, Ill. and also taught for seven years as a public school band director in Texas and Kansas, working with distinguished high school programs in the Houston and Wichita areas. He has worked with numerous distinguished composers including Michael Daugherty, John Mackey, Kristin Kuster, Steven Bryant, Joel Puckett, Carter Pann, and Roshanne Etezady. 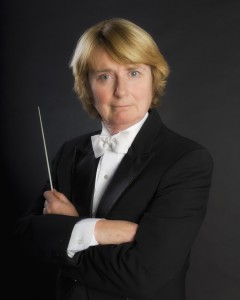 Pat Setser, Associate Conductor, recently retired as Supervisor of Music for the North Kansas City Public Schools and Director of Bands at Winnetonka High School.  Over the years, her bands received consistent 1st Division ratings and performed at the Kennedy Center in Washington, DC, and Carnegie Hall. Ms. Setser is a member of the music staff at the University of Central Missouri.

Dr. Phil Posey, Conductor Emeritus, is a graduate of Florida State University and Eastman School of Music and received his DMA in Conducting and Music Education at the Conservatory of Music, University of Missouri-Kansas City.  He has done post-doctoral studies in conducting at the Hochschule for Music in Vienna, Austria and studied with numerous noted conducting teachers including Elizabeth Green, Leonard Slatkin, and Arbo Arman.

From 1965-2004 Dr. Posey served as Director of Instrumental Studies at William Jewell College in Liberty, Missouri,  where he founded the Liberty Symphony Orchestra and served as Principal Conductor.

As a result of a sabbatical leave in 1993, he became the conductor of the Shaanxi Symphony Orchestra in Xi’an China. He has been invited back seven times to conduct the orchestra in concerts and tours.